My Ride in a Waste Truck 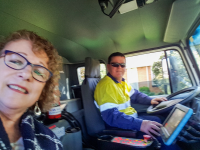 After writing a story about the new electric-powered East Waste truck, our intrepid reporter was invited for a ride on the regular rubbish collection.

"It is a beautiful spring morning and I meet Bill, my driver, in L’Estrange Street Glenside. “Hop in,” he says and I move to the driver’s side door (it has dual drive) and hop up two steps into the cabin of an East Waste truck.

Bill has been with East Waste for 11 years and has his routes memorised. Today he is collecting the residual (red lid) bins in Glenunga and Frewville. On board cameras show the contents of the bin being emptied and I am surprised at the high number of bins containing a small amount. I ask Bill why people don’t leave the bin for the following week or even share a neighbour’s bin. “Some people don’t like to do that,” he says.

Approximately 1,100 bins are picked up and emptied on Bill’s round and each one costs money. If residents reduced the amount of rubbish going into their red bin and only put them out when close to full it would save money. I note at least a dozen bins which contain only one small bag of rubbish and two of those are next door to each other!

The constant sound is of the diesel engine – the actual pickup doesn’t make a lot of noise (except for heavy objects mistakenly placed in the red bin such as bricks). When East Waste takes delivery of their new electric-powered truck later this year Bill says it will be a big change. “Today’s round is pretty flat,” he says. “But when I do Beaumont and Stonyfell the hills cause the engine to be a lot louder.” The electric truck won’t make any noise so people won’t hear it coming. I joke that a lot of people rely on the noise of the truck to rush their bin out at the last minute.

Travelling down a side street we see a dad and his two young boys on the footpath, fascinated by the approaching truck. Bill tells me the family is there every week and as we pass I wave to them. Bill often sees children on the streets watching the truck go past.

The truck is full of technology including front and rear cameras, sensors and bin counters. Every individual bin has a Radio Frequency Identification which the computer can read. If a bin has rubbish around it because it is too full or animals have scavenged in it (not all lids are closed as they should be) the driver can take a photo which is sent direct to the depot. That way if a resident complains, East Waste can show the rubbish was there before pick up. Bill gets a message that a bin was missed on a Frewville street but the owner admits he put it out late. Bill will go back and collect it the next day.

After an hour of cruising the streets I return to the office with a much better understanding and appreciation of the rubbish pick up. Thanks Bill!”