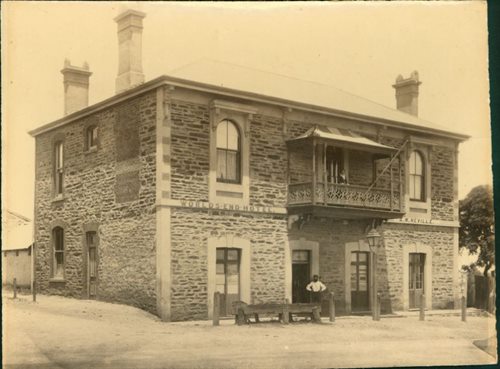 At the far east corner of the City of Burnside, part of the former village of Mak-gill (now Magill), were two hotels, World's End and the Tower Hotel. The Tower Hotel still stands at the major intersection of Magill and St Bernards Road (located in the Campbelltown Council boundary). World's End Hotel was located on the corner of Pepper Street and Magill Road.

The World's End Hotel was built in 1845 further down from the major intersection and '...was a famous staging post for heavy traffic halting overnight at Magill with stables that were the most extensive of any in the colony at the time' (Roxley 1976). The Hotel may well have been named by the Scottish, for it had the same name as a pub on the Royal Mile (High Street) in Edinburgh. Perhaps tongue in cheek, seeing that Magill was really at the 'edge of this capital's world', surrounded by bush wattle and mighty eucalyptus interspersed with welcome hotels. The life of the World's End Hotel diminished when the tee-totallers worked to revoke its licence and it became a coffee house around 1909. It was demolished on account of salt damp in the 1960s.

The lane entrance to the Hotel's stables became Pepper Street, and until electricity arrived around 1908, lighting was primitive, with Hurricane Lamps swinging outside the hotels. The image of the World's End in 1884, shows the hitching post and wooden water trough outside the double storied bluestone building. Although, it is documented that a Post Office replaced the hotel, the present old double-storied building next door to the Post Office looks very much like the hotel, so controversy reigns. No 550 Magill Road next door to World’s End Hotel was A C Martin's undertaker and carpentry business built in 1903 and operated by Martin's son, aged 90, till 1976. The architecture is very similar to the World’s End Hotel.

Written by Diana Chessell, Historian to the Pubs Series