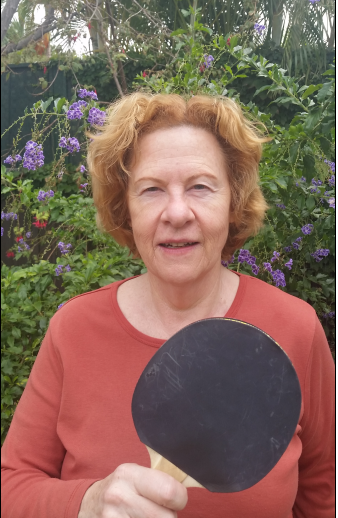 Pam Dean is following her father’s tradition of volunteering. Her father Bill was a volunteer for 25 years and set up and ran the Community Bus Service. The Bill Dean Lounge in the Civic Centre is named after him.

Pam’s introduction to volunteering is a bit different. After she was made redundant in 2015 it took a while to find things in the community to do. “I learned that the Burnside Council offered table tennis on a Saturday afternoon, and I used to play as a child with my family, and more competitively while at university,” Pam says. “Although I had a gammy knee at the time, I decided to give it a go.”

Pam, 65, visited the Community Centre on a Saturday afternoon and enjoyed it and was made welcome, so continued to go. “I enjoyed the activity, the company and the diversity of the group,” says Pam. “There were young people (youngest 23), old people (oldest member at the time was 93), and people of many different cultural backgrounds and abilities.” The group played for the enjoyment of just playing and were inclusive rather than competitive. Two volunteers ran the group, one who communicated with the council, collected the money and discussed things with the group when required, the other who set up the tables and did some coaching if required.

When one of the volunteers resigned the group was looking to fill the position and decided to share the responsibilities among a few people. Pam put her hand up and was given the job of facilitator, the person who communicated with the council and therefore had to become an ‘official’ volunteer.

“I was thrown in the deep end to some extent,” Pam says. “Soon after I took on the role, the group was confronted by the effects of the Fringe on our activity.”

After negotiating a solution the group decided to meet at different times if they could still play together, which resulted in playing on Wednesday afternoons (which has continued and become permanent) as well as Saturdays.

“The group has continued to grow,” says Pam. “It retains its norm of being inclusive and supportive to its members. It is a very special group and I am very proud to be part of it.”

Now that the Covid 19 virus has forced closure of the group, Pam, of Tusmore, is attempting to continue to retain links with the group by weekly email communication, just so people know they have not been forgotten.

Pam found she still had a bit too much time on her hands and always having been a keen gardener, when she saw the call for a volunteer facilitator for the new community garden at Conyngham Street she put her hand up for that as well. “I have training and skills in group work, communication and facilitation, so this type of role seems a good fit,” says Pam. “I have done a bit of research on how the ‘usual’ community garden is run, and already identify that this one will probably not be able to run in the same manner, due to the very limited number of garden plots available.” Pam will consult with the people who have expressed an interest in the community garden, and in her usual democratic, consultative leadership style will work out what suits the group best under the circumstances. “It will evolve into hopefully something productive and constructive,” says Pam.

Bill would be proud of his daughter.