This consultation has concluded. 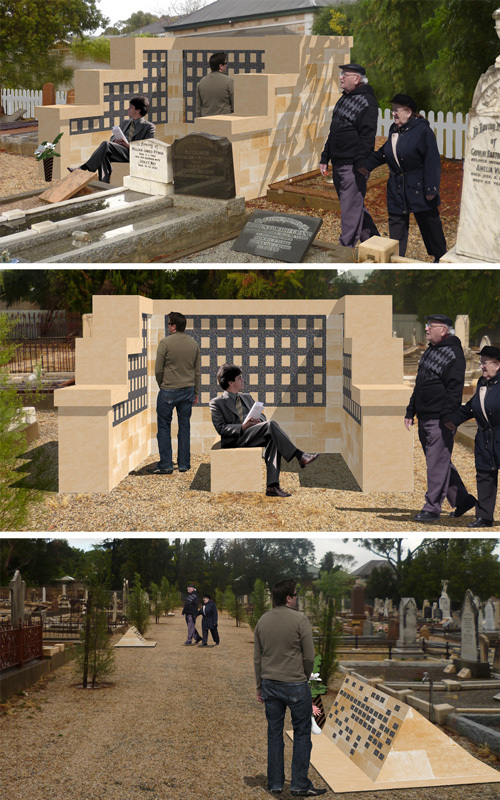 Ashes are enclosed in a plastic receptacle and are placed in the niche which is then sealed;a commemorative plaque is secured to the niche. It is possible for ceramic photos as memorials to be secured to the plaque. It is also possible to provide for the placement of a small floral tribute at the site of the niche.

With the Magill Cemetery now fully leased and effectively closed to any new internments, the installation of a Columbarium Wall will increase capacity to provide internment within the Burnside Council area.

A percentage of the income generated through the Columbarium Wall would help with the management and governance of the Wall and internments, annual maintenance requirements on the wall, and could improve and fund regular maintenance and improvements of the Magill Cemetery site.

The social and community value of a heritage site is significantly increased when frequented and can be considered to be a real focus of community pride when managed and maintained appropriately.

The Magill Cemetery Columbarium Wall Concept Plan identifies three potential locations within the Cemetery for the Wall(s) to be installed.

Option 1 - is to place the Columbarium in a U shape on the western border where the current side gate entrance onCarey Street is located.

Option 2 - is to have a similar U-shape wall at the southern end of the Cemetery (at the far end of the central path).

These U-shaped arrangements of the Columbarium Walls would measure 1.8 metres high by 5 metres (back wall) with 3 metres being the measurement of the side walls. The Wall itself is 350mm thick. These walls would provide in the order of 160 niche spaces for the internment of ashes.

Option 3 - provided in the Columbarium Wall Concept plan are for lower style memorial walls which would line the Central pathway (situated at the rear of a gravesite rather than in front).

There are four of these walls placed in the Concept Plan;however they can be built one at a time, as demand requires them. This option would measure 900mm high and can range between three - six metres in length. ‘This option’ also allows for the back-filling of the wall with an appropriate garden or flower bed.

There are no historical records that indicate the proposed sites for the Columbarium Wall has ever been used for the internment of any remains. With this being said however, if Council progressed with constructing the Wall, a sonar survey of the proposed site would be arranged prior to any agreements being entered into.

Each location is situated to allow for existing pathways and would not intrude on existing grave-sites, while seating would also be provided to allow for visitors to the site.

History of the Site

The Magill Cemetery was established by Robert Cock and William Ferguson circa 1850 and is of local historic and heritage value. Land for a Chapel and burial ground was set aside at Magill when the area was subdivided in 1838 as 'The Village of Makgill' by two Scots who had met on board 'The Buffalo', Robert Cock and William Ferguson. The Chapel did not eventuate on this site, but the Cemetery did, and it is one of only two in Burnside (the other one is the Glen Osmond Anglican Cemetery attached to St Saviour's Church).

In 1878, the land comprising the Cemetery was donated to theMagill Methodist Church. In December 1972, the Secretary of the Magill Cemetery Trust wrote to Council advising that few grave sites remained available and the Trust’s earning capacity was low. He sought discussions with Council with a view to the Council assuming control of the property under s591 of the Local Government Act, 1934.

The Cemetery passed into the care and control of Council in 1974 as per the Local Government Act, 1999. The 900 grave sites at the Magill Cemetery are now either full or have been pre-sold deeming it to be closed, except for those with leases where second or third interments in a grave are possible or where ashes (cremated remains) can be interred in a grave.

Council adopted the Magill Cemetery Policy in 2007. This Policy declares the terms and conditions of managing the Cemetery based upon preserving the heritage of the site. Costing the City of Burnside approximately $5,000 per annum to maintain, the Council is responsible for the care, control and management of the Magill Cemetery, which is a Local Heritage place and is located within Residential Policy 3 (Magill) in the Burnside Development Plan and has an area of 5,639m2.

The MCMP has been developed to achieve the following:

By committing to the actions proposed in the MCMP, Council:

In accordance with the MCMP, the option of a Columbarium Wall on-site is to be open to further consultation.

A Report will be presented to Council with results and recommendations arising from this community consultation process.

The time and date of the meeting will be publicised and all resolutions will be available at www.burnside.sa.gov.au.

For further information please contact the
City of Burnside’s Strategic Project Officer, Barry Cant on 8366 4223 or at bcant@burnside.sa.gov.au

This consultation has concluded.